Despite androgen dependence in a majority of castration-resistant prostate cancers, some cancer cells are independent of androgen receptor (AR) function, a feature of heterogeneity in prostate cancer. One of the aggressive variants of prostate cancer that are AR independent is neuroendocrine prostate cancer (NEPC). This manuscript will focus on the new finding of human one cut domain family member 2 (ONECUT2) transcription factor and its role in castration resistance, especially in NEPC.

Prostate cancer is the most common cancer diagnosed in men and the second leading cause of cancer-related deaths in the United States[1]. Given its dependence on the AR axis, prostate adenocarcinoma can respond to androgen deprivation therapy (ADT) for a variable duration, but eventually, it progresses to metastatic castration-resistant prostate cancer (mCRPC)[2]. Most recently, the newer generation of androgen receptor (AR) signaling inhibitors such as enzalutamide and apalutamide has improved outcomes in patients with mCRPC, but they inevitably develop resistance to these drugs as well. There are several proposed mechanisms of resistance to androgen deprivation or AR inhibitors, many of which are thought to be AR-dependent, including AR-activating mutations and constitutively active AR splice variants[2]. However, there are also AR-independent mechanisms, with very low or absent AR expression found in tumor cells that render ADT ineffective and are associated with neuroendocrine (NE) differentiation[2]. NEPC is an aggressive variant of prostate cancer that exhibits not only AR independence but also neuroendocrine (NE) differentiation and even distinct histological features such as small cell carcinoma instead of adenocarcinoma[2,3]. Though NEPC can rarely arise de novo, more commonly, it arises from adenocarcinoma in response to selection pressure for AR-independent cells from treatment with AR signaling inhibitors via lineage plasticity and NE differentiation[3,4]. Recent studies spearheaded by and Guo et al.[6] showed that ONECUT2 is an important regulator of AR-mediated growth and a driver of NE differentiation in transition from adenocarcinoma to NEPC, and is being investigated as a new drug target with potential therapeutic implications. This manuscript explains how ONECUT2 leads to AR independence and NE differentiation observed in NEPC.

ONECUT is a family of transcription factors related to hepatic nuclear factor 6, which has been shown to be involved in organogenesis, cell fate, and tumorigenesis[7]. In particular, ONECUT1 plays an important role in hepatobiliary tract disease by regulating the development, differentiation, and function of hepatocytes and cholangiocytes[7]. Decreased expression of ONECUT1 and its target genes is associated with malformation of the liver, bile duct, gallbladder, and pancreas, as well as diabetes. Furthermore, ONECUT1 may also play a role in the prevention of hepatocellular carcinoma and pancreatic cancer by acting as a tumor suppressor[7]. In addition, ONECUT1 also helps regulate the development of retina and motor neuron[7].

ONECUT2 is another transcription factor that regulates cell proliferation, migration, and differentiation, which was first discovered by Jacquemin et al.[8] in 1999. ONECUT2 is found in various organs, including the liver, skin, brain, testis, and bladder[8]. In contrast to ONECUT1, ONECUT2 expression has been shown to be elevated in multiple different cancers, including prostate cancer[6], ovarian cancer[9], gastric cancer[10], colorectal cancer[11], hepatocellular carcinoma[12], lung adenocarcinoma[13], and neuroendocrine tumors[6]. Specifically in prostate cancer, increased ONECUT2 expression has been linked to the aggressiveness of the disease, disease progression, biochemical recurrence, and metastasis[5,6]. ONECUT2 mRNA level was found to be elevated in mCRPC prior to any treatment and was higher than in non-metastatic tumors[5]. ONECUT2 target genes are involved in the cell cycle, angiogenesis, and hypoxia, which in turn are implicated in tumor growth and metastasis in prostate cancer[6].

Both ONECUT1 and ONECUT2 are transcriptional activators of the ONECUT family with similar but distinct functions in development and pathogenesis in various organs. Similarities and differences between ONECUT1 and ONECUT 2 are outlined in Table 1.

Characteristics of ONECUT1 and ONECUT2 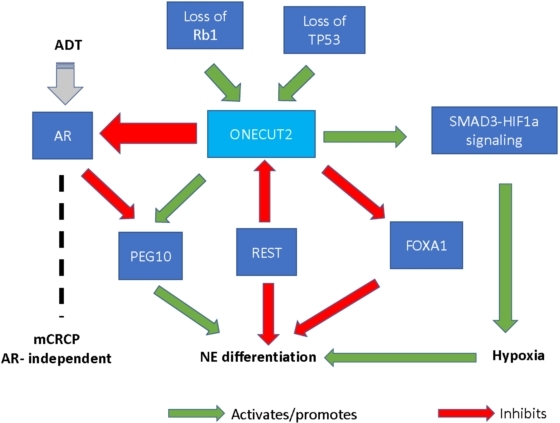 Guo et al.[6] demonstrated that hypoxia can induce NE differentiation and disease progression in prostate cancer, evidenced by an increase in NE marker gene expression in hypoxic conditions compared to normoxic ones. Knockdown of hypoxia-inducible factor 1α (HIF1α), a transcription factor that regulates the hypoxia signaling pathway, led to a reduction in NE marker gene expression[6]. Guo et al.[6] also showed that ONECUT2 is involved in regulating the hypoxia pathway, with ONECUT2 activity correlating with tumor hypoxia in the progression from adenocarcinoma to NEPC. ONECUT2 upregulates hypoxia-associated genes such as adrenomedullin and angiopoietin-like 4 by activating SMAD family member 3, which interacts with HIF1α in regulating hypoxia signaling[6] (see Figure 1). Altogether, these findings suggest that regulating the hypoxia pathway is yet another way how ONECUT2 contributes to NE differentiation.

ONECUT2 AS A DRUG TARGET IN PROSTATE CANCER

Following the discovery of ONECUT2 and its role in the transition from prostate adenocarcinoma to NEPC, new drugs targeting this pathway are being developed and studied in clinical trials. CSRM617, a small molecule inhibitor of ONECUT2 developed by Rotinen et al.[5], led to cell death in prostate cancer cell lines with high ONECUT2 expression. The level of ONECUT2 expression was positively correlated with treatment response to CSRM617[5]. In vivo, CSRM617 led to significant reduction in tumor size, PEG10 protein level (a marker of NE differentiation), and metastatic growth[5].

TH-302 (evofosfamide) is a hypoxia-activated prodrug with an alkylating agent moiety that is released only in hypoxic environments, such as those found in hypoxic tumors like NEPC[16]. TH-302 was shown to significantly inhibit tumor growth in NEPC, but less so in adenocarcinoma[6]. There was a positive correlation between the level of ONECUT2 expression and the treatment response to TH-302[6]. These findings show that NEPC and a higher level of ONECUT2 expression are both associated with a greater degree of hypoxia, which in turn lead to an enhanced response to TH-302. TH-302 is being studied in clinical trials, including a phase I/II clinical trial (NCT00743379) that focuses on the efficacy of TH-302 in combination with chemotherapy such as docetaxel in multiple solid tumors, including mCRPC that were not previously treated with chemotherapy. Another phase I study (NCT03098160) examines the safety and toxicity of TH-302 in combination with ipilimumab in advanced solid malignancies, including mCRPC.

Given the rising use of newer generation AR signaling inhibitors, mCRPC exhibiting AR independence will likely grow in prevalence[2]. Treatment of prostate cancer with AR inhibition may lead to selection for cancer cells with elevated ONECUT2 expression, thereby contributing to resistance to AR-targeted therapy and development of NE features that lead to more aggressive phenotypes with worse clinical outcomes[2,3,5]. It is, therefore, crucial to continue further research on the understanding of the master regulators of AR independence such as ONECUT2 and develop safe and efficacious drugs against such targets. We believe biomarker-driven correlative studies are key for the success of future drug development targeting ONECUT2. 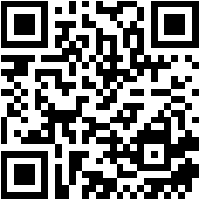