Targeted therapies in cancer: where are we going?

© The Author(s) 2018. Open Access This article is licensed under a Creative Commons Attribution 4.0 International License (https://creativecommons.org/licenses/by/4.0/), which permits unrestricted use, sharing, adaptation, distribution and reproduction in any medium or format, for any purpose, even commercially, as long as you give appropriate credit to the original author(s) and the source, provide a link to the Creative Commons license, and indicate if changes were made.

Targeted therapies in cancer aim to specifically block the activity of crucial proteins or signaling pathways necessary for the growth and/or survival of tumor cells. A major breakthrough in targeted cancer therapy was the introduction nearly two decades ago of imatinib, an inhibitor of the BCR-ABL tyrosine kinase for the treatment of chronic myeloid leukemia. Over the last years, significant advances in our understanding of tumor biology have facilitated the development of many drugs targeting not only kinases, but also other protein families and cellular processes. Several of these agents are currently employed or being implemented for the treatment of different hematologic and solid malignancies, such as lung cancer. The special issue on “Targeted cancer therapy” will include reviews and commentaries updating the clinical use of targeted agents in the treatment of different tumor types, and the mechanisms that underlie the action of drugs directed to different types of targets. The special issue will also include research articles presenting novel outstanding data on all aspects of targeted cancer therapy. All submissions will undergo rigorous peer review and will be published free of charge upon acceptance.

This special issue will provide a comprehensive overview of novel effective anticancer-targeted compounds to readers working in basic biomedical sciences as well as clinicians. It will cover drugs targeting not only kinases, but also other protein families and cellular processes, with the aim of clarifying their development, pharmacology, resistance factors, and new strategies and applications, against major tumors.

During the past two decades novel anticancer treatments have emerged from advances in our understanding of tumor cell biology, and a number of molecular and biologic targets have been identified. New drugs have been developed to attack these targets and their use to neutralize specific molecules or genes involved in the development of cancer is appropriately called “targeted therapy”. The development of these novel molecularly targeted agents responds to the fact that conventional chemotherapeutic treatments have reached an efficacy plateau against most solid tumors, and deal with significant toxicity[1]. Cytotoxic drugs inflict cell death by affecting processes that are commonly overactive or enhanced in tumor compared with normal cells, such as DNA synthesis. Biologic agents interact with receptors, ligands, signaling molecules, or genes that are pivotal in tumor growth and development, and they can inhibit tumor cell proliferation, induce programmed cell death, inhibit angiogenesis, or enhance antitumor immune response[2,3].

A number of targeted therapies are currently employed or being implemented for the treatment of different hematologic and solid malignancies, such as imatinib, an inhibitor of the BCR-ABL tyrosine kinase for the treatment of chronic myeloid leukemia[4], and the first-, second- and third-generation EGFR inhibitors gefitinib, erlotinib, afatinib and osimetinib in non-small cell lung cancer (NSCLC)[5]. Others are currently being evaluated as both monotherapy and in combination with cytotoxic drugs or others targeted agents.

However, several clinical studies demonstrated that targeted therapy in combination with cytoreductive chemotherapy should not be given to all patients irrespective of their characteristics, but only to individuals presenting the molecular target of the therapy and in whom these targets are crucial for cancer cell survival[6].

Crizotinib clearly represents an example of a successful application of such straightforward development from chemical identification of the active principle to the demonstration of its clinical activity and approval for clinical use. From the very early stages during its development it was indeed evident that it would target both c-Met and the EML4-ALK gene fusion product described in 5%-10% of NSCLC patients[7]. This produced accelerated clinical development in those patients and it took only three years to complete a phase III trial in selected patients, achieving excellent results, and to obtain FDA registration.

A proper pharmacological evaluation should also be accompanied by a deeper understanding of the genetic heterogeneity of most tumors, as detected using patient samples obtained during treatment and following disease progression[8]. Only then, these innovative therapeutic approaches are expected to improve the efficacy and selectivity of current anticancer regimens.

Since the vast majority of advances in the treatment of cancer have resulted from the use of combination therapy, another important issue is the correct development of combination of newer agents with chemotherapy. Drug combinations are indeed widely used because multiple drugs affect multiple targets and cell subpopulations, increasing the therapeutic effect and minimizing drug resistance, but in several cases the addition of new targeted agents to standard regimens failed to improve survival[9,10].

This outcome may be explained by the lack of patient selection as well as by other factors, including possible negative interaction or suboptimal design of the studies, inaccurate evaluation of antitumor efficacy, and controversies on drug combination analysis in preclinical models. Of note, only a few preclinical studies predicted such disappointing outcomes[11], and further studies on potential molecular mechanisms underlying the interaction between chemotherapy and are needed (as illustrated in the Figure 1 for the preclinical data on combination of anti-EGFR agents and chemotherapeutic compunds). Cytotoxic agents and EGFR inhibitors may interact through modulation of the main downstream signalling pathways regulated by EGFR. The phosphorylation of EGFR occurs in response to several cytotoxic stresses including various anticancer drugs (i.e., in a SRC-dependent manner after cisplatin) and correlates with the synergistic inhibition of cell growth and induction of apoptosis by anti-EGFR agents[12]. EGFR phosphorylation also activates Akt, but the subsequent ubiquitylation of the receptor leads to its degradation along a proteosome or lysosome pathway, resulting in phospho-Akt downregulation, as shown with gemcitabine and pemetrexed. The reduced phospho-EGFR nuclear transport reduced the expression of E2F-1, TS and dihydrofolate reductase, thus favouring 5-fluorouracil (5-FU) and pemetrexed activity[13-15]. Finally, EGFR inhibitors might reduce DNA-dependent protein kinases (DNA-PK) expression and the repair of DNA inter-strand cross-links and platinum adducts[16,17]. 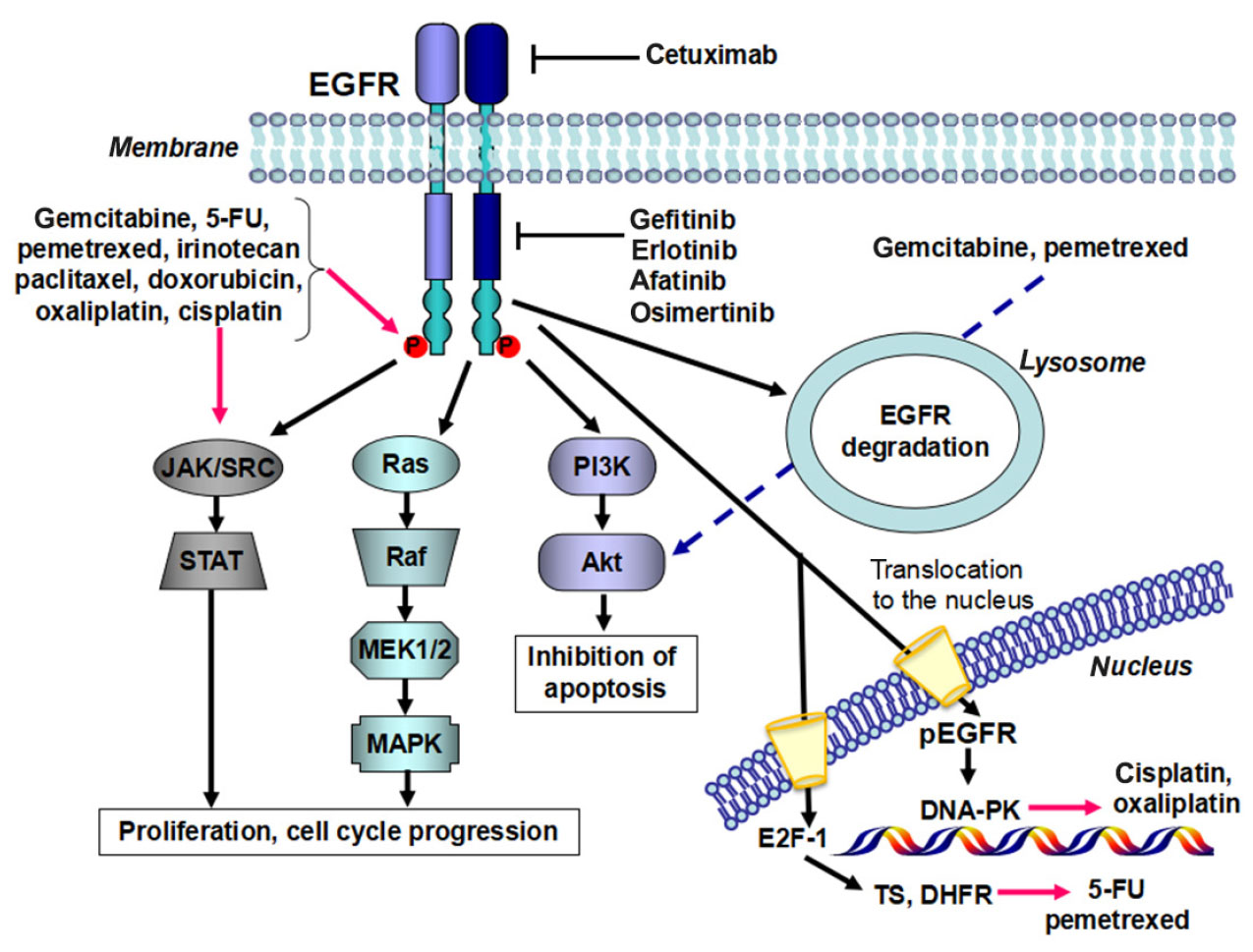 Regarding this issue, cancer is a multifaceted disease and preclinical models used to characterize the molecular context in which synergistic interaction may occur should be implemented with appropriate design and simple, but mathematically robust methods. Several attempts have been made to quantitatively measure the dose-effect relationship of each drug alone and its combinations and to determine whether a given combination would gain a synergistic effect. In a review by Greco et al.[18], thirteen different methods for determining synergism were listed and none of them supported the others. In a following extensive review, Chou[19] suggested the extension of mass-action law to multiple drug-effect systems and illustrated the theoretical basis to optimize the experimental design for drug combination studies. However, tissue specific features such as pharmacokinetics and toxicity cannot be studied in vitro. Nonetheless, cells in culture retain many features of inherent intracellular biochemistry and metabolism, and environmental as well as experimental conditions can be controlled easily and precisely. Provided the researcher is aware of their limitations, then cell cultures may be a useful experimental tool and cautious extrapolation to the clinic might be possible, particularly when the cell data are entirely consistent with in vivo results.

Therefore, the articles of this special issue will highlight aspects that are of outmost importance for effective targeted agent combinations as well as to overcome molecular mechanisms conferring resistance. Other studies will discuss the identification of new biomarkers that would help in the selection of the optimal drug and schedule as well as the development of new technologies to decipher drug sensitivity and/or resistance which might be applied to the patient before and during treatment, using samples from surrogate tissues, including liquid biopsies.

There are no conflicts of interest.

Quantities of Citations Each Year

* All the data come from Crossref 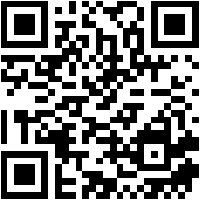